This is a small toy example of a queue system. This example illustrates how data collector monitors can be used for performance analysis of a system. The CPN for the system also includes breakpoint monitors, a write-in-file monitor and a user-defined monitor.

This is a CPN of the queue system. 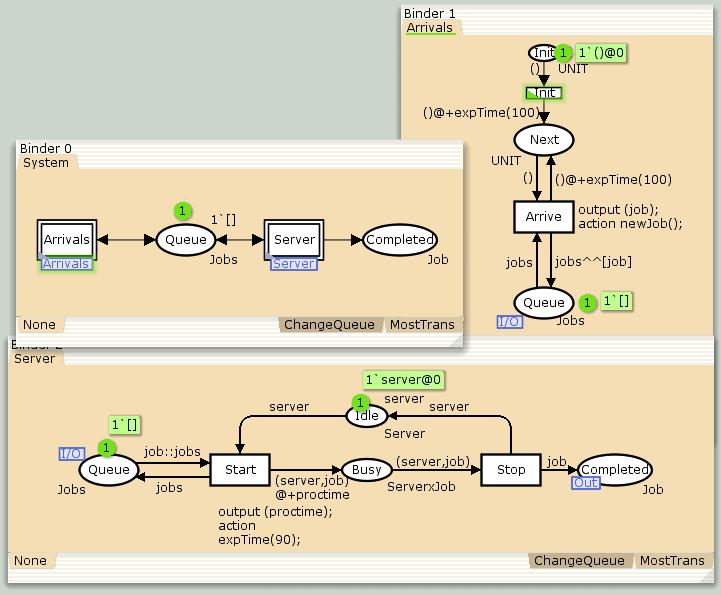 CP-net of a queue system

Several different performance measures can be calculated for this system. This example will show how monitors can be used to calculate different kinds of statistics regarding, e.g., the length of the queue of jobs, the amount of time that jobs spend in the queue, and the percentage of time that the server is busy processing jobs.

The net can also be downloaded from here.

The color set Job models a job as a record consisting of two fields. The field named jobType determines the type of the job since it has type JobType. The AT field is of type INT, and it is used to store the arrival time of the job, i.e. the time at which the job arrived in the system.

The color set ServerxJob a product color set that is used to represent the server when it is busy processing a job.

The function expTime is used to generate integer values that are approximately exponentially distributed with a mean value determined by the parameter mean. The function uses the exponential random distribution function.

The function intTime converts the current model time to an integer value. The type of model time values is described on the help page for simulator functions.

fun getfid () =
(* this will raise Option exception if fileid = NONE *)
Option.valOf(!fileid)

The reference variable longdelaytime is used to indicate the lower limit for what will be considered long waiting times for jobs in the queue.

The reference variable fileid is used in a user-defined monitor that is described on the help page for Queue System Miscellaneous Monitors. The variable is a reference to a TextIO.outstream option. For more information about TextIO.outstream and option values, see the online help pages for the TextIO structure and the Option structure in the SML Basis Library.

The function getfid will return the file identifier that fileid refers to, assuming that fileid does not refer to the value NONE.

The System page provides the most abstract representation of the queue system.

The system consists of two modules that are modeled by the two substitution transitions Arrivals and Server. These two modules are described in detail below.

The arrival of jobs to the system is modeled on the page Arrivals. 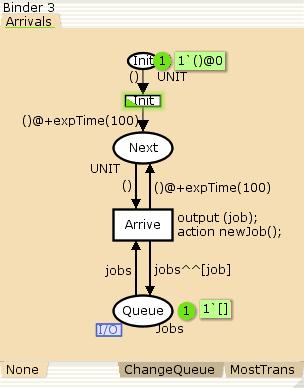 The transition Arrive will occur when the time stamp of the token on the place Next is equal to current model time. When the transition occurs, a new job is created and bound to the variable job via the code segment of the transition. The new job is then added to end of the queue of jobs, as determined by the arc inscription jobs^^[job] on the arc from Arrive to place Queue. The time inscription @+expTime(100) on the arc to place Next is used to determine the time at which the next job will arrive. The inter-arrival times are exponentially distributed with a mean of 100 time units.

The server in the system is modeled by the Server page in the net.

The server can start processing a job (transition Start), if the server is idle and if there is at least one job in the queue of jobs (job::jobs on the arc from place Queue). When the transition Start occurs, the expTime function is called in the code segment, and the value that it returns is bound to the variable proctime which determines the processing time for the job that is removed from the head of the queue. Processing times for jobs are exponentially distributed with a mean processing time of 90 time units.

Several monitors have been created for the CPN of the queue system. These monitors are described on the help pages mentioned below.