Cloning allows parts of the structure of a net to be reused, either elsewhere in the net or in other nets.

Cloning an element of a CPN – for exampole, a place – is designed to be similar in use to the Create tools. Once the element has been cloned, the tool in hand is similar to a create tool, except that the attributes of the created element are the same as those of the one being cloned. In the case of arcs, the shape of the arc is determined when the clone is placed on the page, in the same way as with the Create arc tool.

Inscriptions can also be cloned and result in a cursor with the inscription attached that may be applied to a suitable element. This can be used to easily copy complicated inscriptions — for example, arc inscriptions or code segments – that are needed in several places.

Cloning of groups of elements is an extension of the basic cloning, where more than one element is cloned at the same time. 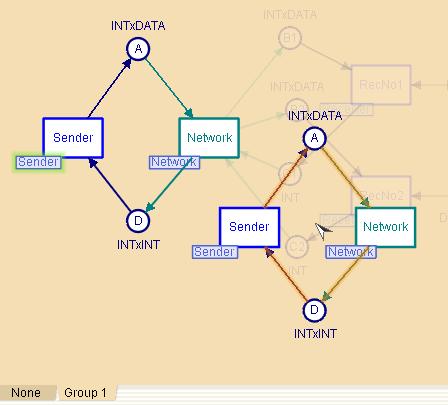 If a group is selected, and the target of the clone tool is a member of the selected group, then the elements in the group will be cloned. As with cloning of individual elements, the result is a cursor with the cloned elements attached that may be used to insert them one or more times.

Note that there are some restrictions on what can be cloned in this way. The cloned group of elements must not have any dangling arcs (arcs with one or two endpoints not in the group), attempting to clone a group with dangling arcs result in an error message similar to the one below. Similarly, inscriptions cannot be cloned as part of a group unless the element they are attached to is also in the group. 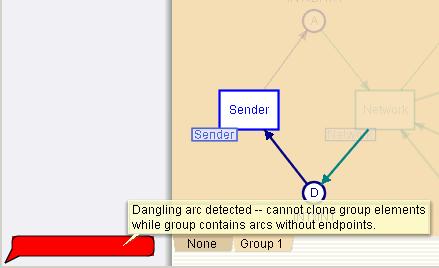 Cloning a group with dangling arcs

Cloning subpages between nets is more complicated. The hierarchical relationships that are created in the new net depend on the way in which new objects are created.

Another way to clone subpages between nets is to:

Independent copies of subpages in new net from clone

The Clone Element tool also allows cloning of a page or a hierarchy of pages. In this case, a new page is created for each page in the cloned hierarchy (i.e., the page being cloned and all of its subpages), each with the text(clone appended to its name.

The top page will be cloned, and it will be independent of the original page, but for all subpages, new instances of the original subpages will be created. Once pages have been cloned, it is possible to rearrange them in the hierarchy (as described in hierarchy).

Guidelines, groups, and fusion sets are also cloned to the new page containing the cloned elements of the original page.

Currently it is not possible to clone a page between nets. A workaround to this problem is to create a new page in the other net. Then clone the elements of the page you wish to clone, and place them on the new page in the other net. Because guidelines cannot be part of a group and groups cannot be part of another group, guidelines and groups have to be made by hand. Note that any guideline or group on subpages of the elements cloned to the new page will have their guidelines and groups to the new net.

Cloning a group is not the same as cloning the elements of a group. When a group is cloned, a new group is created with (initially) the same members as the original group. Members may then be added to or removed from the new group using the Toggle group tool, as if the group had been created with New group.