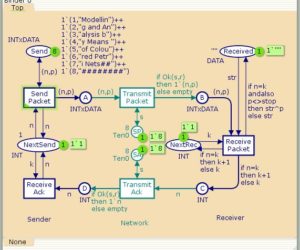 This is a small toy example describing a simple protocol by which a sender can transfer a number of packets to a receiver. The communication medium may loose packets and packets may overtake each other. Hence, it may be necessary to retransmit packets and to ignore doublets and packets that are out of order. The example is a modified version of a timed CP-net presented […]

This example shows how the CP-net from Simple Protocol can be turned into a hierarchical CP-net – with separate pages (subnets) for the Sender, the Network and the Receiver part. The protocol is modified to accommodate multiple Receivers. The files for this net can be found in a subdir of cpntools called Samples\\HierarchicalProtocol. The files are The net to load in CPN Tools A document […]

This example shows how the CP-net from Simple Protocol can be modified so that the retransmission of messages is controlled by a simple timer – modeled by means of two places and two transitions. The CP-net is not using time stamps and hence it should not be confused with the Timed Protocol. The files for this net can be found in a subdir of cpntools […]