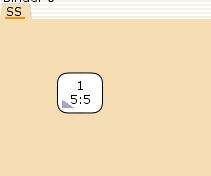 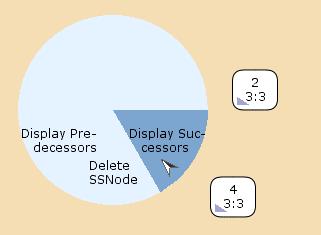 If any of the successor nodes already exist on the page, then they will not be displayed again. 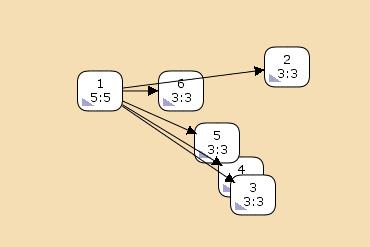 Clicking on the small triangle in the node will display a node descriptor which shows the marking that is associated with the node. 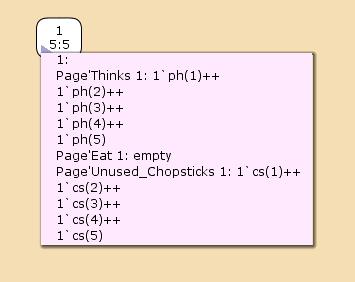 The node above corresponds to the initial marking of the Dining Philosophers example.

Similarly, clicking on a state space arc will display an arc descriptor which describes the binding element associated with the arc. 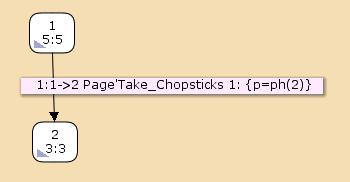 An arc descriptor can be hidden again using techniques similar to hiding a node descriptor.

If the cursor hovers over a node descriptor or an arc descriptor, the element which the descriptor belongs to will be highlighted.

Displaying nodes and arcs from lists

Here are a couple of examples of CPN ML expressions that will return lists of nodes for the example net for the Dining Philosophers example.

Applying the tool to the expression [1,2,3] will result in nodes 1, 2, and 3 being drawn (if they are not already on the page). If the tool is applied to the other CPN ML expression in the figure, the expression will first be evaluated, and it will return a list of nodes corresponding to markings in which the marking of the place Eat contains the multiset 1`ph(1). All of the nodes in the list will then be drawn.

If the tool is applied to a CPN ML expression that contains syntax errors or that does not return a list of nodes or arcs, then an error message will be shown next to a status bubble. Here is the error message after the tool was applied to the expression [1,2,3 which is missing the right bracket. 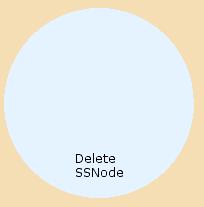 All state space elements can be moved by dragging them. The Style tools can be used to change graphical attributes such as line color and line width.