Template code for monitoring functions is automatically generated when the following tools are applied:

The template code for monitoring functions will generally have to be modified in order to obtain the desired behavior.

In some cases, errors will occur when an attempt is made to generate template code. These errors will often be caused by problems with the names of nodes, pages, or the monitor itself. If an error occurs when generating template code, then a red highlight will be added to the monitor, and speech bubbles will indicate the cause of the problem.

Monitor template code is very dependent on the nodes that are associated with the monitor. The template code depends on the names of many different kinds of elements, such pages, places, transitions, color sets, and variables.

Here is a subnet, i.e. a group of nodes, that could be associated with a monitor. The subnet is on the page named Top. 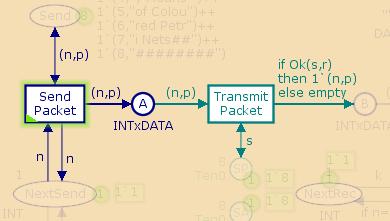 Here the template code that would be generated for a predicate function for this particular subnet.

The function takes two arguments: bindelem and Top'A_1_mark. The first argument bindelem is a binding element, i.e. a specification of a transition instance together with a binding for the variables of the transition. A description of the legal binding elements for this monitor can be found below.

The last line of the declaration of predBindElem indicates that when any other binding element occurs, then the function will return the value false. This could happen if, for example, the second instance of transition Send_Packet occurred.

Remember that template code must generally be modified in order to obtain the desired behavior.

As illustrated above, template code is very dependent on the information associated with the nodes that are examined by a particular monitor. If changes are made to a monitored node, then the changes are not propagated to the visible monitoring functions for the node. In many cases, changing a monitored node will result in syntax errors in monitoring functions that previously were correct. For more information about such errors; see errors in monitors.

Here is an example of an error that appears if the name of the transition Send_Packet is changed to Send_A_Packet.

Error after editing a node

Template code is generated automatically when new monitors are created by applying the tools mentioned above. In some cases it is useful to be able to generate new template code for a monitor, e.g. 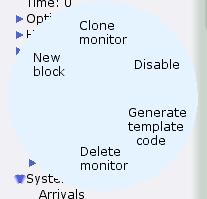