Each transition may have an attached code segment which contains ML code. Code segments are executed when their parent transition occurs.

Code segments are created by adding/editing an inscription for a transition.

Before a code segment has been added, the default text for the inscription is:

Each code segment may contain:

The CPN variables listed in the input pattern can be used in the code action even if you have declared an ML identifier with the same name in the declaration node.

If the input clause is omitted, it implies that no CPN variables can be used in the code action.

An output pattern must be a CPN variable or a tuple of CPN variables without repetitions.

If the output clause is omitted, it implies that no CPN variables are calculated.

A code action is an ML expression, preceded by the keyword action. The code action cannot contain any declaration of color sets, CPN variables, or reference variables. It can, however, apply user-declared and predeclared constants, operations, and functions. In addition, new functions and constants can be defined for local use by means of let-in-end.

In this example, there is one variable in the input pattern (m), and two variables in the output pattern (n,b). 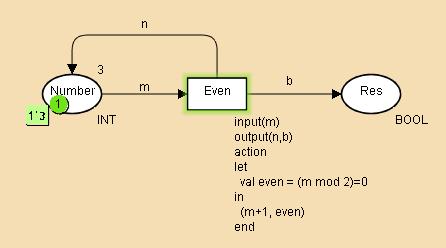 When the transition Even occurs in the given marking, the CPN variables will be bound as follows:

The I/O version of the example net for the simple protocol also uses code segments.