A net is nondeterministic if the occurrence of an enabled transition can lead to a marking that cannot be uniquely determined by the binding of the transition’s variables.

The following are examples of constructions that often cause nondeterministic behavior in a net:

Non-deterministic nets are generally not well-suited for state space analysis.

In some nets it may be obvious for the user that there are only a limited number of possible outcomes where there is nondeterministic behavior in a net. For example:

In some cases it is possible to make a nondeterministic net deterministic in order to make it better suited for state space analysis. Some examples are shown below. 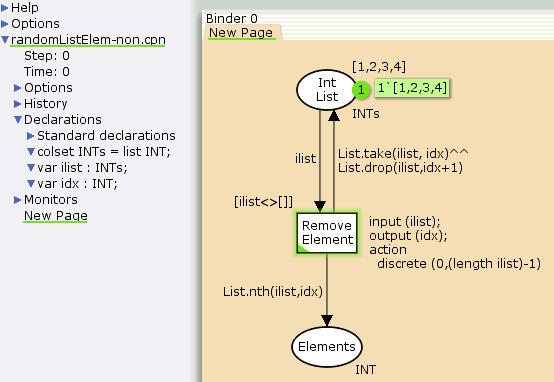 If you know that there is a relatively small upper limit on the length of the lists that can be found on the place, then it is possible to make the above nondeterministic net deterministic as follows. Rather than using a function to randomly pick an the index of the element from a list, a variable is used to indicate the index of the element that was to be returned. The variable is from a small color set, i.e. a color set with less than ca. 100 elements. This makes it possible for the state space tool to consider every option, because it can simply use brute force to try binding the variable idx to each of the known values in the color set. This net is deterministic.

Note that this solution cannot be used if you do not know the maximum length of the lists. 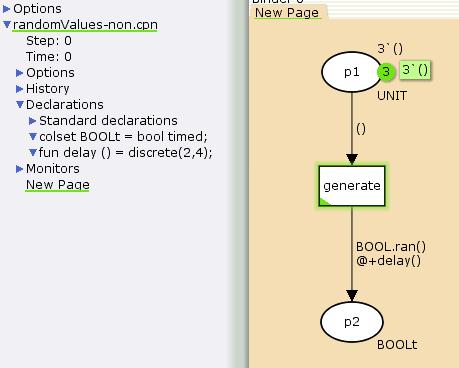 Since both the BOOL color set and the set of possible values that are returned by the delay function are small sets, it is again possible to replace the use of functions with variables, and thereby make the net deterministic. Here is an example of how this can be done: 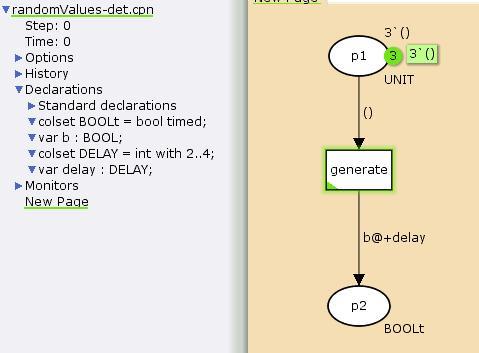